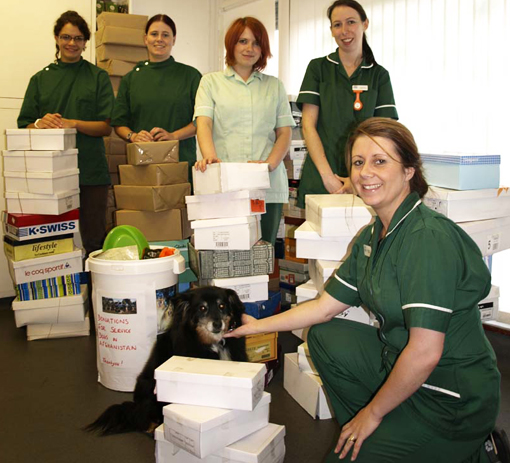 We are proud to support a campaign the likes of which none of us had ever seen before, which is saying something with over 35 years of agency experience between us.

One of our long standing clients, Blythman and Partners Veterinary Practice launched an appeal that saw people from the region show their generosity and support for the Arms and Explosives Search (AES) teams that serve on the frontline in Afghanistan, but it wasn't the soldiers that were the main focus of the appeal. This time, the aim was to help the canine heroes.

Animal lovers from all over the North East took part in the practice's appeal by donating treats and toys that would fill nearly 200 shoe boxes to recognize the efforts of the AES dogs serving on the frontline in Afghanistan today.

Everyday, the dogs save the lives of hundreds of soldiers and civilians on the frontline in Afganistan thanks to their keen sense of smell and their determination to work hard for hours on end.

The dogs undergo rigorous training to ensure they can withstand the challenging conditions of a war zone and support the troops no matter what. They are conditioned to search for the scent of explosives making them an invaluable asset to the soldiers whose job it is to find and disarm the devices.

The Blythman and Partners team had the idea to reward the dedicated dogs by collecting shoe boxes filled with treats to say thank you for their outstanding work after Donna Heron, head nurse at Blythman and Partners' South Shields branch had been speaking with a close friend who is currently on a tour of duty out in Afganistan.

Donna said, "My friend mentioned that the troops really appreciate the support they get from their friends and family back home and that it was the little things that they send, home comforts like their favourite shower gel, that meant the most."

"The dogs that they work with work extremely hard to protect the soldiers on the front line but they don't receive the same little treats from home, so we thought sending them these rewards would be an excellent way to recognize the outstanding work they do. After all they don't just save lives, they make hardship and danger just that little bit more bearable for our troops and we think they deserve a treat for that!"

"We're so grateful to everybody who helped us to exceed our original target of 100 boxes."

All eight Blythman and Partners branches, from Whitburn to Heddon-on-the-wall, took part in the appeal and each branch was inundated with treats and toys for the dogs, making the past couple of months emotional for the staff.

Kerry Tudor, Silver Bullet Account Executive explained, "When Donna explained the appeal to me I thought it was a fantastic and truly worthwhile appeal. We arranged some PR to spread the word to people across the region and came up with some great visuals to catch people's attention too. We had thought that the clients from each of Blythman and Partners eight branches would get involved and donate one or two items but the response to the appeal exceeded anything we could have hoped for."

"Donations came in from clients as we?d hoped but external organisations who heard about the appeal got involved as well, a tennis clubs donated tennis balls and a local hospital donated an astonishing 27 shoe boxes full of treats for the dogs to enjoy after reading about the appeal in the paper."

The appeal struck a chord with dog lovers and inspired a lot of personal tributes that Blythman and Partners staff found particularly touching, kids included pictures of themselves with their pets, and many of the donations came with letters thanking the dogs for their hard work including one particularly touching letter from two guide dogs hoping that the dogs in Afghanistan could enjoy the toys as much as they do here at home.

The boxes, which were being in sent to Afghanistan in batches so to avoid disrupting the post for the forces, reached the AES dogs in good spirits.

The team who inspired the appeal are now back home from their latest tour of Afghanistan and there's a very good chance you may have seen some of the dogs who benefited from the on the Pride of Britain awards show earlier this month - they definitely appeared to be in high spirits!