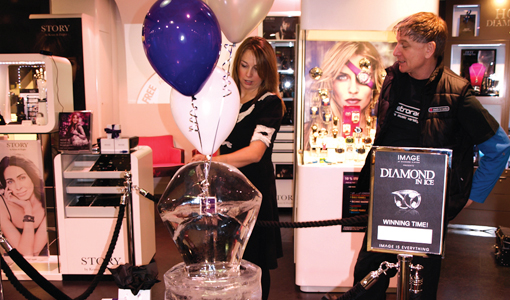 Diamond in Ice... Ice always melts, but a diamond is forever

We're very excited to be working on an extremely unusual and festive promotion with our wonderful clients, Image at Richard Sinton. We've teamed up with Metro Radio to create what might be our coolest campaign to date, if you'll pardon the pun.

This weekend Image at Richard Sinton gave away a diamond ring worth over £1000 in a competition with a very exciting twist. The ring, an exquisite, British made 'swirl' ring made up of three diamonds set in 18 carat white gold, was frozen in a block of ice, beautifully carved into the shape of a diamond and then placed in store and left to slowly melt over Friday and Saturday. We invited customers to guess when the ice sculpture would melt and release the ring trapped inside, and the person with the closest guess without going over the time would win the ring!

Image at Richard Sinton opened just a year ago in Eldon Garden's lower level, to complement the Richard Sinton flagship store, and cater for the younger market. After enjoying modest success in its inaugural year, we realised there was an opportunity raise awareness of the store amongst the hundreds of consumers that pour through Eldon Square on a daily basis who may have previously missed it due to it's location.

The campaign objective was to ensure that Image at Richard Sinton would be at the forefront of people's minds when they wanted to purchase jewellery. Their product range is stylish and diverse, offering more than the standard high street stores, while remaining affordable to an image conscious younger demographic.

On the week commencing 28th November 2011 we launched the Diamond in Ice promotion. A mix of radio air time throughout the week as a fantastic tension-building advert to enticed listeners to visit the website or come to the store for more information. This was followed by a two day, in store event centered around the ring within the ice sculpture. Customers were invited to fill out entry forms guessing when the ring would be released and those who made a purchase during the event could also take part in the Image all day happy hour game which offered discounts of up to 100% at the press of a button.

Store Director, Richard Sinton commented, "We wanted to remind customers of the value of visiting the high street rather than shopping solely on line. Throughout the promotion customers were invited to fill out entry forms guessing when the ring would be released and those who made a purchase during the event could also take part in the Image all day happy hour game which offered discounts of up to 100% at the press of a button."

"The atmosphere in store was electric and we hope that now when people consider buying jewellery, Image will be at the forefront of their mind!"

The promotion was a huge success, happy customers were offered champagne as they browsed the stores fabulous jewellery whilst being entertained by the brilliant Kenny D and Anna Foster from Metro Radio. Hundreds of people were lucky enough to treat themselves or their friends to a gorgeous Christmas present or two at a discounted price, and one lucky gentleman, Mr Martin Green from Hartlepool is the proud owner of the diamond ring after guessing that the ring would be released from the ice at exactly 17.21 on Saturday evening. well done to you Mr Green.

It's refreshing to see, that amongst the doom and gloom of a challenging economic climate, a retail outlet (and a relatively young one at that) has made such a significant investment into their customer relations especially with such a positive response from those who took part. We can't wait to build a great relationship with all of the new customers and keep them up-to-date with the exciting things to come to Image in the future.

A very special thank you to the team at Metro Radio and ice sculptor Darren Brinsky of UK Ice Sculptures but mostly to the fabulous staff at Image at Richard Sinton for letting us take over your beautiful store for the weekend. However, we'd also like to apologise because we know you're all going to be extremely busy from now on...