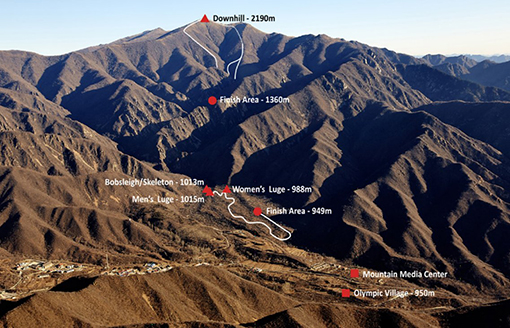 It’s been an interesting few weeks for international sport. Following on from Sepp Blatter’s single handed destruction of the FIFA brand, we’ve had some mind-boggling allegations of doping in professional cycling and athletics interspersed  with the announcement of that well-known Winter Wonderland, Bejing, being chosen as host city for the 2022 Winter Olympics.

Now, given that the Zhangjiakou and Yanqing mountains have absolutely minimal snow making the Games rely entirely on artificial snow, this would seem a strange choice, although, perhaps no stranger than awarding the 2022 World Cup to Quatar where air conditioning is being installed in the new stadiums to reduce the average daytime temperature of 40°C.

So why Bejing? In essence, because no-one else wanted it with the exception of Almaty, capital of Kazakhstan with all that implies about human rights and democracy. The seemingly more geographically logical choices of Stockholm, Munich and Krakow had all declined to make hosting bids, primarily due to the cost of hosting the event. Remember, the last Winter Olympics at Sochi in 2014 supposedly cost an eye-watering $50 billion to host and while it undoubtedly enriched a small minority, purely coincidently closely linked to the ruling elite, the rest of the country is still paying for it.

Greece had paid $10 billion 10 years before for the honour of hosting the 2004 Olympics – today most of the venues are abandoned and decaying whilst the country’s economic situation lurches from worse to catastrophic – perhaps more than a co-incidence? Similarly Brazil built shining new stadiums for the football World Cup of 2014 yet many are now abandoned with the $550milliom Mane Garrincha Stadium in Brasilia now used as a bus parking depot.

So, when in July Boston declined the IOC’s invitation to bid to host the 2024 Summer Olympics, it was simply indicative that the Olympics, Winter or Summer, has become very much a poisoned chalice that countries drink out of at their peril.

Of course, there are exceptions, particularly the 1984 Los Angeles Olympiad. Given the run-up to the event – Tehran was the only other bidding city but dropped out due to the internal political and social crises of that time, whilst 14 Eastern Bloc countries declined to attend in response to the American-led boycott of the 1980 Olympics in Moscow – the LA Olympic Committee, led by the talented, street-wise and very shrewd Peter Ueberroth, played a blinder, controlling expenses, using existing stadia in the main whilst having new build facilities paid for by corporate sponsors. The result was that the City made a profit.

The 2012 London Olympics cost £8.92 billion but was planned to become a model of sustainable development with venues recycled for alternative uses and the Olympic Village set to become a community of 2,800 much needed new homes. The cost still worked out as £142 per head for every man, woman and child in the UK.

I vividly recall the football games at St James Park for the 2012 Olympics – there was a fantastic atmosphere from the local and visiting fans, marred only by the empty seats reserved for the IoC, the security gates they had insisted be installed across Gallowgate and the numerous limousines standing empty but pre-booked by the same IoC members who hadn’t even turned up.

So what’s the answer? There’s no doubt international sport meetings are wonderfully enjoyable and superb means for promoting sport generally and international understanding, but while they are controlled by a self-governing ruling elite who force totally unrealistic conditions on host cities, they will continue to become an unwanted guest, only affordable by countries and societies who are not troubled by democratic accountability.

Until international sports organisations such as FIFA and the IoC become accountable to democracies, these gatherings of international sportsmen and women coming together every few years will continue to be dominated by despotic governments with financial rewards distributed to a tiny and already wealthy minority whilst large parts of the world remain undernourished.

It has been suggested that one answer may be for the Summer Olympics to return to their original Athens home on a permanent basis, not only helping the Greek economy to recover but also sending a clear message that one of the world’s greatest sporting events is no longer for sale to dictators, despots and their connected contractors to consolidate their wealth and power.

Who knows, it’s not as daft as air conditioning open air stadiums in the desert or planning skiing competitions in snow free zones? Greece once stood for democracy and maybe it can again by curtailing the greed and excess that is currently spreading like a cancer through international sport.