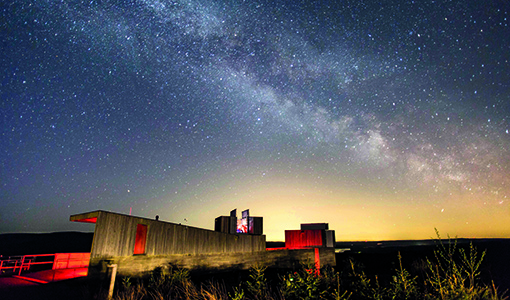 Newcastle-based architectural practice, JDDK Architects, have secured planning permission from Northumberland County Council on behalf of Kielder Observatory for the construction of a Planetarium as a further astronomical attraction to the increasingly popular Northumbrian scientific and tourist destination.

Located just a few miles from the Scottish border high upon Black Fell under some of the darkest skies in Europe and the third largest protected Dark Sky reserve in the world, Kielder Observatory is a public outreach astronomical facility which now hosts over 40 events a month rather than the original few dozen that were originally envisaged at its opening in 2008. In response to the huge demand and interest, a second smaller observatory has recently been opened with the proposed Planetarium designed to further widen the facility’s offer to daytime activities or on cloudy, poor visibility nights.

JDDK Principal Architect, Alison Thornton-Sykes, explained the design,  “The proposal is for a 7m diameter structure set down in the landscape on a 1.1m plinth so that the peak of the dome appears at the same height as the adjacent observatory. The circular form of the domed roof acts as a foil to the linear form of the two observatories with the curved form leading out to define a curved viewing platform. The balustrading and cladding in scorched larch timber contrast further with the observatories while still utilising the same material.”

“The Planetarium and the two observatories are set around a central ‘Village Square’ to create a real sense of place for the whole attraction whilst the external landscaping will be retained as a natural setting. The retaining wall around the planetarium creates a moat effect while also defining a supervised gathering external space for groups waiting to enter the planetarium.”

“It’s good to come back up to work at Kielder following our work in 2012 for the Calvert Trust here for a Visitor Centre, whilst our design for the award winning The Sill Landscape Discovery Centre down the road at Once Brewed for Northumberland National Park Authority, included an Observation Deck specifically for star gazing.”

John Holmes, Operations Director for Kielder Observatory, added, “It’s been great to be working with JDDK again as I have commissioned them a number of occasions during my career particularly at Durham Cathedral and the company always offer highly imaginative and attractive solutions and are always prepared to go the extra mile for their clients whatever the size and scale of the developments.  We are looking forward to securing funds for the planetarium which would be a very valuable asset to our range of facilities particularly in relation to our expanding educational programme.”