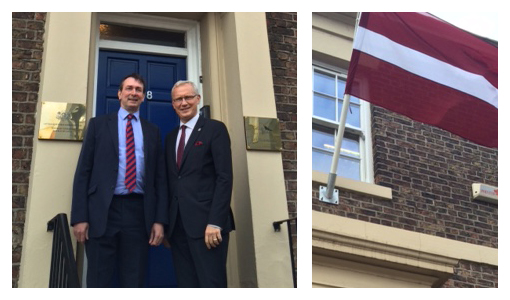 On Friday 18th September, the Honorary Consulate of Latvia was officially opened by the Latvian Ambassador, Andris Teikmanis.

The Latvian consul is Steve Gillie, MD of Shipping Company, GT Gillie & Blair, and Chairman of South Shields-based Grainco Ltd, cereal buyers and merchants. Steve was appointed earlier this year to serve the Consular district of NE England and is the first consul to be appointed in Newcastle since Latvia regained independence in 1991.

So why does any of this matter? Well, primarily because it shows how important Latvia and the other Baltic states view the NE of England as a trading partner.

In so doing, it’s actually reminiscent  of the 13th Century Hanseatic League, possibly the first Common Market and a remarkable alliance of 170 North European cities, many of which are commemorated on Newcastle Quayside’s Swirle Pavillion artwork.

So congratulations to Steve Gillie and here’s to increased trade with Latvia and the other Baltic States. Newcastle may be a small city on the Northern edge of the country, but our manufacturing and service skills are second to none and the status that now having a Consul here is an indication of how important some countries view the region – maybe Westminster should too…